There are more than 20 species at Palheiro; a good example of all to be found on the island. There is an especially active colony of birds of prey that feed and breed around the golf course. To promote the presence of the birds and make it easier to observe them, feeding stations and breeding boxes have been installed around the Estate. For the same reason, other types of shelters and food stops have been constructed so the owls and bats can be seen when the sun goes down. So, during a round of golf you will hear a variety of song and you might be able to see some of the following birds:

Grey Heron (Ardea cinera): A large grey bird with a long neck. Flies slowly with legs trailing - common but does not breed here.

Pallid Swift (Apus pallidus brehmorum) and Plain Swift (Apus unicolor): Both blackish species can often be seen "hawking" for insects over the course. The Pallid is paler.

Bertelot's Pipit (Anthus berthelotii): A small grey-brown bird that runs about the fairways. Similar to the Rock Pipit seen on Scottish links but has a more bleached sun-faded appearance. Common.

Grey Wagtail (Motacilla cinerea): A small bird seen near water. Confusingly appears mostly yellow but gets its name from its grey plumage above. Bobs up and down and flicks its tail. 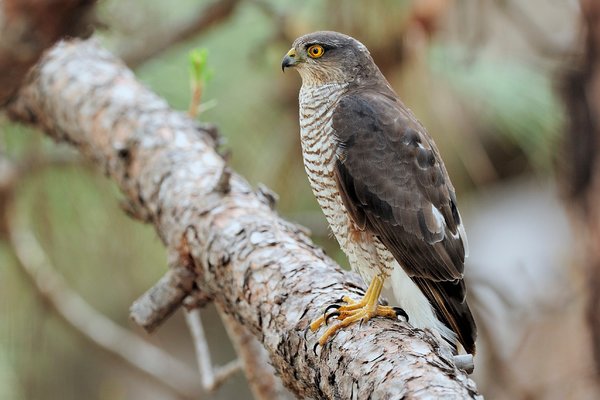 This forest bird of prey depends on its native habitat of the laurel forest. It is an endemic subspecies of Macaronesia which occurs only in Madeira Island and five islands of the Canary archipelago: Gran Canaria, Tenerife, La Palma, La Gomera and El Hierro. Due to its rapid flight and elusive behaviour it is difficult to observe, and it is more active during the breeding season (February to July). The female is larger and has a grey-brown belly whereas the male is reddish-brown.

Although only 9 nesting pairs have been officially identified in Madeira, they have been spotted nesting in the trees of Palheiro Gardens.

As a long-time Island resident, I was brought up on the story that the Madeira Trocaz pigeon lived exclusively in the laurel forests on the north of the island and fed on laurel berries; when they ventured out to eat newly planted cabbage, furious farmers used to shoot them and so the population was in decline. Much of this continues to be true though birds are seen in small pockets of laurel forest on the southern side of the island and have now been protected for many years. The population is now believed to be increasing.

David Bannerman in volume two of his book "Birds of the Atlantic Islands" gives pride of place to the Trocaz with a coloured frontispiece plate and saying how the adult bird could be distinguished by its red bill, silver ring round its neck, pinkish tinge on the breast and very long middle toe or claw. (See picture). There are indeed several mounted examples of this magnificent bird in the Funchal Natural History Museum. As a frequent visitor to the Palheiro Gardens over the years, I have noticed
an ever-increasing number of Trocaz pigeons. At first, I thought they might have lost their way or had been frightened by forest fires or hunters. Now they are more established and Luis Alves the Palheiro Golf greenkeeper believes there must be several dozen living in the woods and feeding off the Laurels, Holm oaks and kindred trees. They have become quite tame as indeed they must have been when the island was first discovered.

Recently a wounded juvenile, unable to fly, was found and placed in a cardboard box; Dr. Frank Zino and Dr. Manuel José Biscoito curator of the Natural History Museum were consulted and the latter arranged for the bird to be collected by João Silva, keeper of the Museum collections. The bird responded to his treatment, is now feeding itself and endeavouring to fly, - albeit somewhat erratically…. Hopefully it may one day be returned to fly again in the sanctuary of Palheiro. I was told that this was the second such case as another very young chick fell out of his nest last year at Palheiro and was looked after by João Silva who initially had to hand feed it before it was happily returned to its natural environment.

In the Palheiro Gardens they can sometimes be seen on the lawns and drinking from the ponds. Recently I witnessed a courtship at close quarters as a cock fanned its tail and turned around bobbing about in front of two admiring females. In the late afternoons they can be seen flying to the nearby Ribeiro do Inferno. I believe they are most probably nesting there either in holes or ledges of the stone cliff above the spring at the base of the cliff or in the laurel trees. Visitors to the Gardens rarely visit this wild area containing a number of Madeira endemic trees.